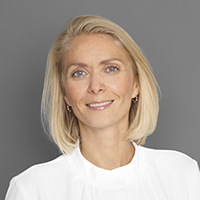 With the election of 45-year-old Anne Buhl Bjelke as the new chairman, the Bech-Bruun partners have chosen a highly skilled and experienced colleague having been employed with Bech-Bruun for more than 20 years. Since 2001, Anne has pursued a career with Bech-Bruun and she has been a partner since 2011. Since 2020, she has been a member of the board of directors and has now been elected chairman.

Chairman with an international outlook
In addition to her new position as chairman, Anne is also a highly recognised lawyer, specialising in insurance law and dispute resolution. She advises Danish as well as non-Danish clients in the insurance industry, and she is an experienced litigator with a right to appear before the Danish Supreme Court conducting cases on behalf of Danish and non-Danish undertakings before courts and arbitration tribunals.

Anne is also chairman of the International Bar Association's Insurance Committee and has been named a "leading individual" in several categories by international rating agencies. In the period from 2016 to 2019, Anne was also a member of the Appeals Permission Board. At the age of 35, Anne was listed as one of the young talents of corporate Denmark in Berlingske Business's "Talent 100", and since 2018 she has also been admitted to "Kraks Blå Bog" listing the most significant Danes.

In her role as chairman of Bech-Bruun's board of directors, Anne will focus on client satisfaction, increased cooperation with clients and Bech-Bruun being the best workplace for all groups of employees.

"I am very pleased that I have the wide support of all partners. It is a great sign of confidence, and it shows that our firm is based on a strong sense of community. At Bech-Bruun, we have built an exceptional law firm, and as chairman I look forward to being at the head of developments pursuing further success", says Anne on her role as chairman.

Leading lawyer to become new board member
At the same time, Steen Puch Holm-Larsen, partner and M&A Real Estate expert, becomes a new member of the board of directors. He is among Denmark's leading lawyers in real estate, focusing on international investments, commercial properties and hotel investments.

For an introduction to Bech-Bruun's board of directors, click here.